In Arkansas, one conservation grant program is striving to teach children the importance and proper way of caring for nature and wildlife, instilling in them the values that will ultimately lead to its own demise.

Through the Arkansas Game and Fish Wildlife Conservation Education Grant Program, fines from hunting and fishing violations help fund conservation education programs hosted by schools and districts across the state. One of its goals: to prevent future wildlife management violations.

“The intent of the grant program is to instill knowledge and appreciation that will encourage youth to be good stewards of our natural resources,” says Brandi Hinkle, director of communications for the Arkansas Economic Development Commission. “Using the fines in a positive way — to help educate youth about conservation in the state — will impact that generation for many years to come, hopefully creating a cycle of responsibility and appreciation of natural resources.”

Being in the South, a lot of us were raised hunting and fishing — I know I was — so a lot of us know how to take care of the land, to leave it like it was when we got there.

Yet without violations, there would be no funds, and without such funds, these programs would in all likelihood cease to exist — a fact that is lamented by Aimee Roberts, district manager for the Conway County Conservation District (CCCD).

“We have been very blessed to receive the money from the grant program,” she says. “If we did not receive it, I don’t see us being able to afford these programs. That grant money is essential.”

In 2018, the Arkansas Economic Development Commission Division of Rural Services, which administers the grants, awarded $531,602.23 in grant money to 253 schools and conservation districts in 71 counties. Any school and district can apply, and only funds collected in the county in which a violation occurred can be used in that county.

“It’s a great benefit, but one of the great things about Conway County is that we don’t see an overabundance of [violations]; there’s not a large amount of money for this program coming in,” Roberts says. “Being in the South, a lot of us were raised hunting and fishing — I know I was — so a lot of us know how to take care of the land, to leave it like it was when we got there.” 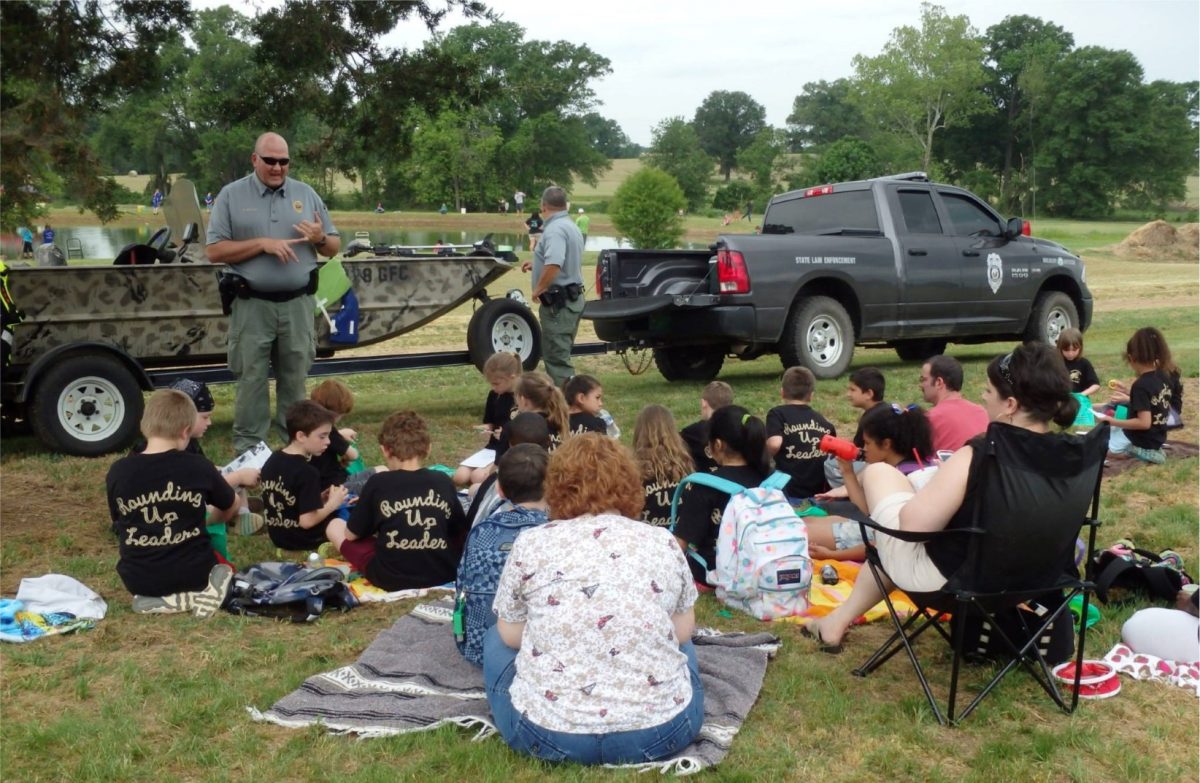 “Everything is either an art project, a craft project, a game or anything that they can get their hands on to truly learn,” says Roberts, who studied early childhood education in college. “That’s when I really saw how making education fun is beneficial to the kids and that they’ll retain more. That [knowledge] came in very handy when I moved into this position.”

Though only district manager for three years, Roberts has served in a variety of roles since she began working for CCCD as an education specialist in 1999, following in her parents’ footsteps. “I’ve done everything from information education to water-quality [management], and I’ve also been a general district technician,” she says. “I actually work out of the same office my mother used to work out of, and my father was the district conservationist for the Natural Resource Conservation Service. So this line of work kind of runs through your veins. It’s sort of a family tradition I guess you could say.”

To say that Roberts loves what she does would be an understatement.

“I get excited, and I ramble about these projects,” she says. “I was told to speak for 15 minutes to Kiwanis about these programs, and finally one of the ladies said, ‘You talked for 30 minutes. We’re going to have to tamp that down.’”

Her enthusiasm for this work translates to fun, memorable activities for the kids as they engage in everything from fishing, to making plaster casts of animal tracks, to engaging in miniature oil spill clean-ups, to building table-top composters, or “worm houses.”

They can see the worm larvae when they first hatch, so they get to see the life cycle of the worm, plus they’re learning about composting.

“The kids will quote unquote feed the worms with things like paper scraps and egg shells, something that doesn’t have too much acidity to it,” Roberts says. “When they lift up the lid, they can actually see the worm tunnels. They can see the worm larvae when they first hatch. So, they get to see the life cycle of the worm, plus they’re learning about composting.”

She also uses an EnviroScape to demonstrate how everything affects our water supply, from runoff from farms to animal waste. “We even take Hershey’s cocoa, and I mix it really thick,” Roberts says. “We have these little cows on there, and we make tiny cow patties so that the kids can see how even that affects the water.”

In addition, the children learn about forestry, pollution, alternative energy sources, weather and the concepts of reduce, reuse, recycle and leave no trace. They also learn about wildlife, through games like Oh Deer and Migration Station and even get to meet some animals firsthand. In the past, guests have included snakes and Yager the Awesome Opossum.

“He’s a rescue that one of the Game and Fish [staff] has raised; he was abandoned when he was born,” Roberts says. “She brought him and talked about how important opossums are, about how they eat so many ticks and kill venomous snakes, that they’re not a bad thing to have around.”

But of all the activities, Roberts says fishing seems to be the one enjoyed most by the kids, some of whom she says “have never fished a day in their life.” 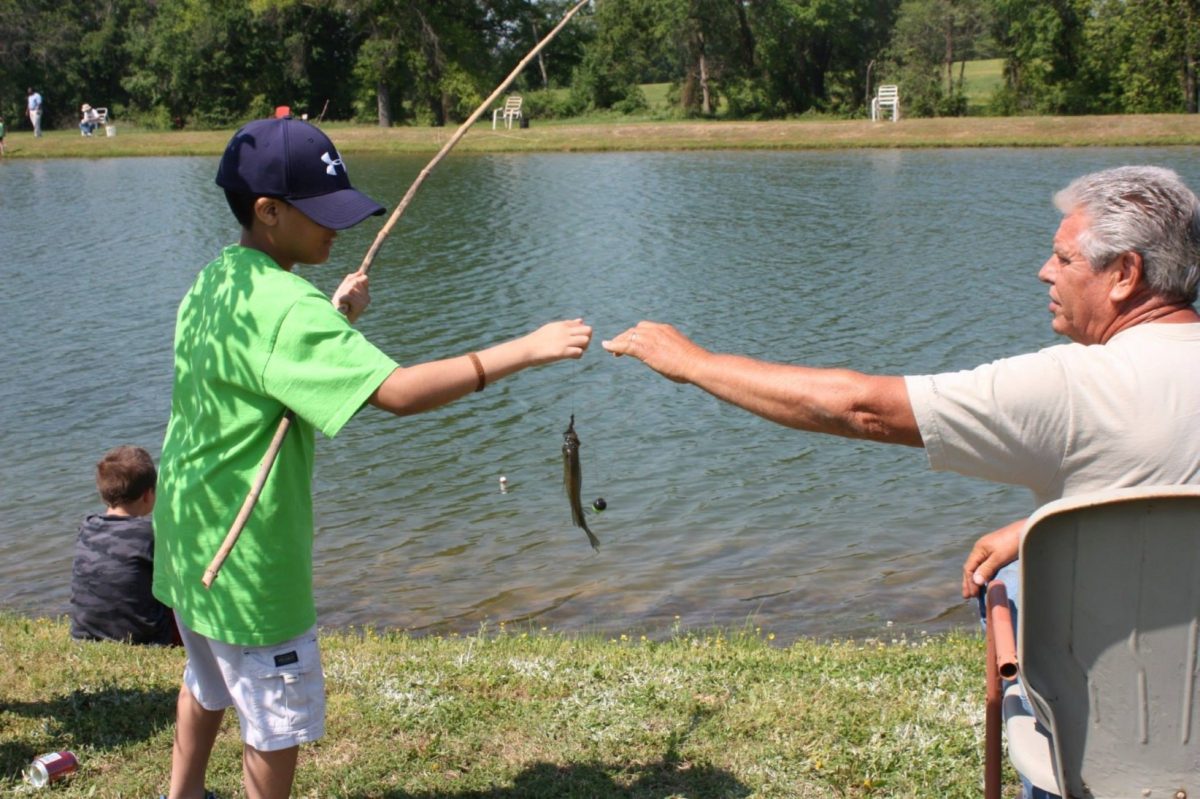 “Game and Fish stocks the pond for us. They usually put 300 catfish in there, and about 300 get caught,” she says. “If we let the kids choose, probably none of them would ever leave the pond.”

Environmental Education Day, which CCCD hosts every May, is geared toward third-graders and typically accepts anywhere from 300 to 350 students. Conservation Education Camp runs every year in June and welcomes up to 25 kids between the ages of 7 and 11. Roberts says both events fill up quickly.

“Within an hour of posting the dates for the camp, I’m full; I can’t fit anybody else in, and I have people calling and saying, ‘Hey, if somebody drops out, can my child come?’” she says, adding that the parents enjoy the events about as much as the kids. “Environmental Education Day has become so popular, and teachers want to make sure that it’s set that they’re going to get to come because it’s just such a fun educational day for the kids and the adults.”

The impact these experiences have on the kids extends well beyond the events themselves. On what Roberts says is a weekly basis, she has youth, “anywhere from college down to [fourth graders],” approach her in town reminiscing about the events.

… we only have this one world, and if we don’t take care of what we have and do irrevocable damage to it, it will be too late.

“I’ve actually had one kid come and tell me that she had gone to Environmental Education Day, and after that, she grew up just loving to learn about wildlife,” she says. “And now, she’s studying wildlife biology. It makes you feel good to know you’re having an impact.”

Having grown up immersed in nature and learning about the importance of caring for our natural resources, Roberts understands the exigency of teaching children about the delicate balance of the natural world.

“It is so important that you start them out young learning this stuff so they will see … how important it is and why they need to take care of it, because we only have this one world, and if we don’t take care of what we have and do irrevocable damage to it, it will be too late,” she says. “So, prevention through education is a really good [approach].”

As ardent about these programs as Roberts is, she admits that a decrease in grant money “wouldn’t be a bad thing for the environment” as it would mean less hunting and fishing violations. However, should the Wildlife Conservation Education Grant Program succeed in achieving its mission to, as Hinkle says, “encourage youth to be good stewards of our natural resources,” Roberts has made it clear she’ll do what she has to to ensure these programs endure.

“I’m not above going out and begging people to sponsor this,” she says, “because I feel that the programs are [that] important.”

Leaving civilization behind is the goal of many of us hikers, hunters and outdoor enthusiasts. It is easy to forget, however, that stepping into the